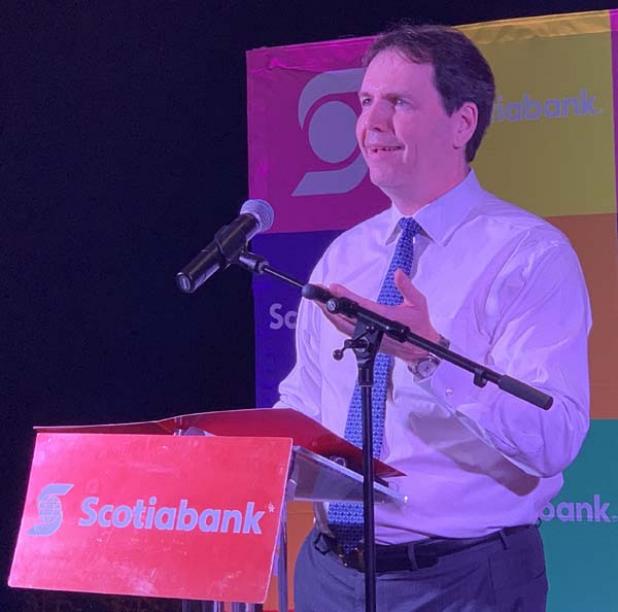 Customer expectations are driving numerous technological changes and banking is adapting at an accelerated rate to meet these demands.

During the Scotiabank Client Cocktail Event that took place recently, Managing Director of the Caribbean East, Scotiabank, David Parks, assured that the bank’s digital move did not mean an elimination of the human aspect of their business. Simply put, they are helping customers utilise technology to assist them with conducting their banking transactions in an effective and efficient manner.

One key initiative in the bank’s digital move, is the upgrading of their ATMs.

“The ATM remains an essential and relevant part of banking automation across the globe. We’ve recognised this and have begun upgrading our fleet of ATMs to Intelligent Deposit Machines (IDMs),” he said.

“This is a key initiative for Scotiabank and one for which I am proud to say, we are the first to offer in Barbados.”

One of Scotiabank’s primary goals is to find ways to improve their customer service and Senior Vice President, International Banking, Scotiabank, Brendan King, revealed that one of the ways they were looking to do such was to introduce a new Scotiabank mobile app in the first quarter of 2020.

King explained to media that the mobile app would be similar to the one used in Canada. However, they have plans to upgrade it and make it very relevant for customers in Barbados.

He assured that with the app, it will be easier for customers to pay their bills, move money between accounts, and when the bank starts working with other banks, to transfer money between banks.

King noted that this “very modern and up-to-date app” will allow customers to do everything that they would normally do at a bank on the app, adding that it will be built from the user out, making it much easier for them to use.

“We know that our customer base in Barbados is eager to go digital. We see some of the strongest digital numbers across our Caribbean footprint driving from Barbados, with only 14 per cent of financial transactions taking place in the bank, while 53 per cent of transactions are either online or at our ATMs,” he said.

He stated that this data showed that Barbadians were more interested in the digital options provided, and noted that this was something they would continue to invest in.