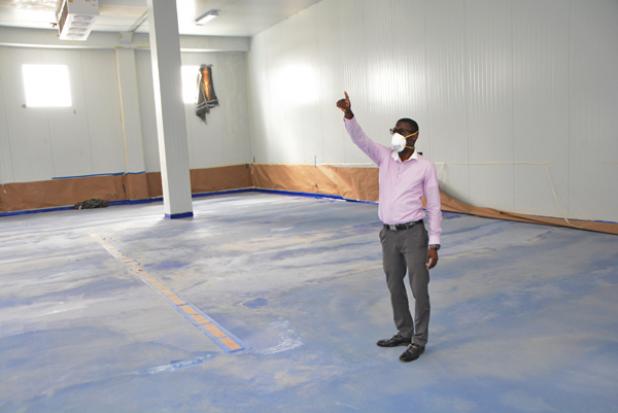 The new BICO ice cream factory is ready to have the seamless, resin floor completed. 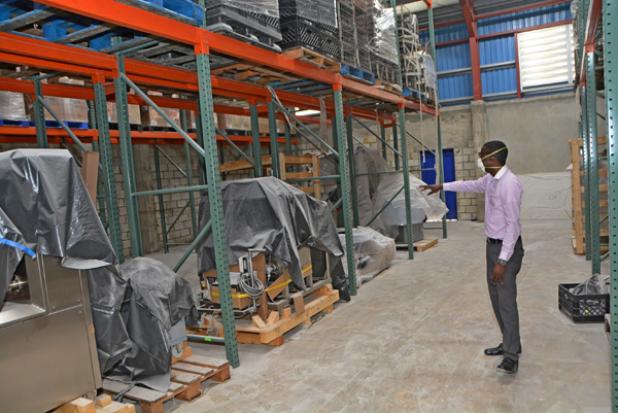 Haydyn Alleyne points out the BICO factory equipment next door to the site, awaiting installation.

ByBICO Limited has been working towards the construction of a state-of-the-art ice cream factory and despite setbacks due to COVID-19, plans are still in place for Barbados to be again provided with cold treats made at home.

Speaking to The Barbados Advocate, Executive Chairman Edwin Thirlwell explained that since the unfortunate fire in 2009 which destroyed the previous factory, BICO ice cream has been manufactured in Suriname. However, the Chairman expressed his excitement of Barbados again having local production.

“What you see in the shops now if you look carefully, will say ‘Made in Suriname’. That is why we are rebuilding the factory where the old one was, to be back manufacturing in Barbados, which everyone wants to see. Everybody wants to see that, but just for the moment it is on pause,” said Thirlwell.

The national shutdown, a strategic measure to halt the spread of COVID-19, affected many businesses and the BICO factory plans were not spared as Thirlwell explained.

“It was halted abruptly, but it is 90 per cent finished. That was scheduled to be commissioned on the 14th of May because the engineer was to fly out from the UK and put in the new equipment, train the staff and produce the first batches. That is not going to happen,” lamented the Executive Chairman.

Thirlwell explained that various issues arose due to the COVID-19 crisis where the flights had been cancelled, the company banned international travel for all engineers and also the engineer may not have been allowed in Barbados. Despite the setback, the Executive Chairman highlighted that this would be an ideal time to finish certain aspects of the build, while things in the island are quiet and almost at a standstill.

“In fact, while it is 90 per cent finished, we really are hoping for some ease because there are certain things we would like to be doing while it is quiet, like the resin floor,” said Thirlwell.

The ice cream factory requires a seamless, resin floor and was due to begin the day after the island shutdown was announced. The team, which had flown in to work on the floor, on arrival, had been diverted to one of the COVID-19 medical facilities, but has since then been cleared. However, work is at a halt due to the measures put in place by the Government.

“I am hoping that we can have some ease. It takes two weeks to do the resin floor; that is one thing. But unfortunately, it takes another three weeks for it to harden and cure before we can even walk on it or put any machinery on it,” said Thirlwell.

After the floor has been given the all-clear, Thirlwell said that the company would start to move in the equipment, which is being stored in a warehouse next door.

“Once we put the factory in, we can start connecting the pipes up and finish the electrical work. We can connect up to the natural gas supply; we are going to air-condition the factory with absorption units, which work off natural gas. It would all drop into place because most of the packaging, raw materials, inclusions, we have it already there, so we are just waiting to see how soon things will start to be eased.”