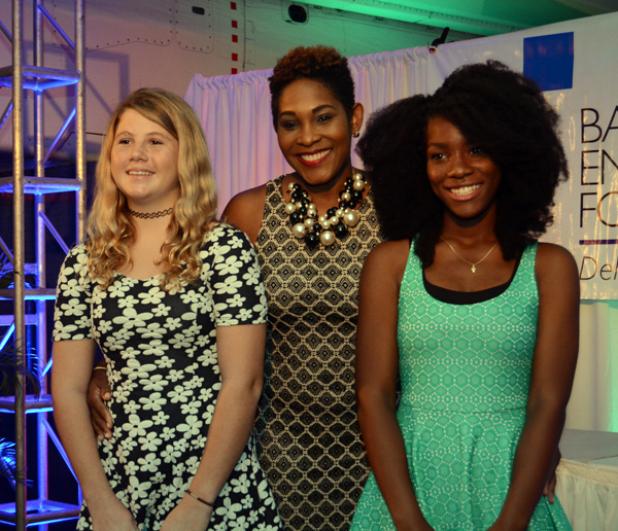 Director of Communications, Flow, Marilyn Sealy (centre) with the winners of the Overall Champions – Awarded for Outstanding Excellence in all Areas, which went to Aurora-Rain Worme (left) of Seaweed Solutions and Sierra Hamblin of Touch of Class (right).

Thu, 03/17/2016 - 6:31pm
By:
Patricia Thangaraj
A total of over $9 000 was raised by the young participants of the $20 Challenge for various non-profits organisations across Barbados.
This was revealed by the Founding Director of the Barbados Entrepreneurship Foundation (BEF) and Project Leader for the BEF/Flow $20 Challenge, Keith Miller, who delivered closing remarks at the $20 Challenge 2015 Awards last Saturday night at the Concorde Experience.
He said: “We held a charity event about two weeks ago at the Cave Hill School of Business where we invited participants who had already donated or who are ready to donate to come on the day and present directly to the charities. They did so to a wide range of charities [and] you heard about some of them tonight – The Ark, the Barbados Vagrants and Homeless Society and so on and so forth, the School for the Blind and Deaf. In that one session, our participants donated over $9 000 [which] they raised themselves, starting with $20.”
Miller said that life is not just about how much you can get out of it, but more importantly, how much you can give back and this is one of the important elements that the coordinators of the $20 Challenge try to instil in the young participants.
In fact, this is one of the criteria used to judge the students, he remarked. “The other thing that we were unable to emphasize enough was the charity element, because they are all judged on profits, for obvious reasons; innovation and social consciousness. We are trying to teach them from day one to be social entrepreneurs and to let them learn a valuable lesson that you can only really be happy by giving and not by taking.”
Meanwhile, with regard to the actual planning and execution of the Challenge, they have seen where many of the students have started off at a certain point when they first join and then as the Challenge progress, they have grown and it is precisely for this reason why these students were awarded, said the BEF Founding Director,
“The products are fantastic. The logic behind why the judges chose them – so just very briefly – for Resourcefulness, one of the reasons why they got that prize was that they recognized that they didn’t have enough money with $40 to do the business so they just bought and sold. They traded with $40 for the first week. Then they turned that $40 into $200 just by buying and selling (at) a profit and then (they) did the business that they wanted to do.
“The young ladies for Perseverance, when they started they were nervous wrecks. They couldn’t speak properly. They couldn’t function properly, but by the end of the $20 Challenge, they were confident, they were approaching customers, they were successful and on and on. There is so much more,” added Miller.