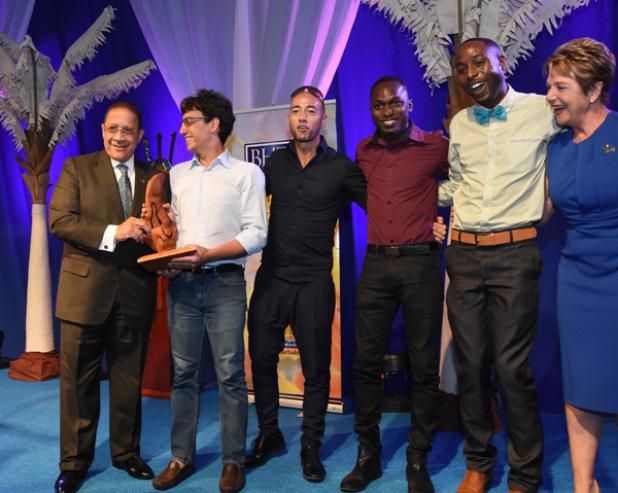 (Far left) William Griffith, President & CEO of the BTMI and (far right) Sue Springer, CEO of the BHTA presenting Tapas Owners / Management & Staff with the coveted prize of Restaurant of the year at the BHTA Awards Lunch.

Barbados registered the best producing year in history for tourist arrivals to the island in 2015. However, they are challenges ahead that the industry will have to tackle moving forward.

This was the assessment made by, CEO of the Barbados Hotel & Tourism Association (BHTA), Sue Springer at the 64th Annual General Meeting at Lloyd Erskine Sandiford Complex.
Good news continues for the tourism industry in Barbados for 2016, Springer revealed, “This trend has continued and the provisional figures revealed that arrivals increased 7.4 per cent during the first quarter of 2016 when compared to the previous year.”
“There has been an active strategy by the Government and BTMI to increase the airlift to Barbados from the various key markets and this has certainly reaped results particularly in the US with arrivals increasing by 13 per cent.”
She continued, “The winter season of 2016 saw a number of inaugural visits of mega cruise ships including the Britannia and the Mein Shift 3. Home porting increased by approximately ten per cent compared to the previous year and further increases in ship calls, passengers and home porting are projected for the 2017 season.”
However, the CEO pointed out, “As we look down the road for the remainder of the year, there are many challenges and opportunities ahead of us. We are still counting the cost of the Zika cancellations and the pace of cancellations that is currently being reported by the hotels is higher than average when compared to previous years. The actual impact of Zika is difficult to measure as we cannot calculate a figure for the persons who, when taking a decision to book a vacation, do not travel to Barbados or the Caribbean due to Zika.”
The rate of exchange for the pound sterling and for the Canadian dollar remains a concern especially in the summer and fall periods as the demographic of the visitor to Barbados is very different during these periods.
The Olympic Games will take place in August and the US presidential elections in November. Luckily we shall be celebrating our 50th Year of Independence in Barbados so any short fall from the US market during November, will be more than compensated by the many Bajans returning home to celebrate.”
According to her, “During the past ten years there has been a progressive decline in the hotel room inventory in Barbados. However, we are now seeing new rooms coming on stream which will bring the room inventory close to that of previous years with the expansion of Sandals resort, the commencement this month of the Wyndham Grand at the old Sam Lord’s Castle site, the replacement of the old Sandy Beach hotel with The Sands Hotel opening for the 2016 winter season, the proposed Hyatt hotel to be built on the outskirts of Bridgetown and the addition of 44 rooms at Sea Breeze in 2017.”
The CEO who will demit office at the end of the year has been a stalwart in the Tourism Industry. In her heartfelt address she said, “There is a saying that everything is for a time” and the time has come for me to step aside and allow a new, vibrant and energetic leader take the reins of the BHTA and lead it into the future for the good of the dynamic tourism sector that we have in Barbados.”
“During my tenure with the BHTA I have been very fortunate to work with a dedicated and knowledgeable group of Presidents, Directors, public and private sector leaders and volunteers. I have learnt so much from them all and have always been impressed over the years by their willingness to contribute time and resources to making our tourism industry and our nation a better place.”
She added, “While I shall most certainly miss many aspects of my work, I shall be leaving confident both in stewardship of the BHTA’s volunteer leadership and the skills and commitment of our staff.” (NB)