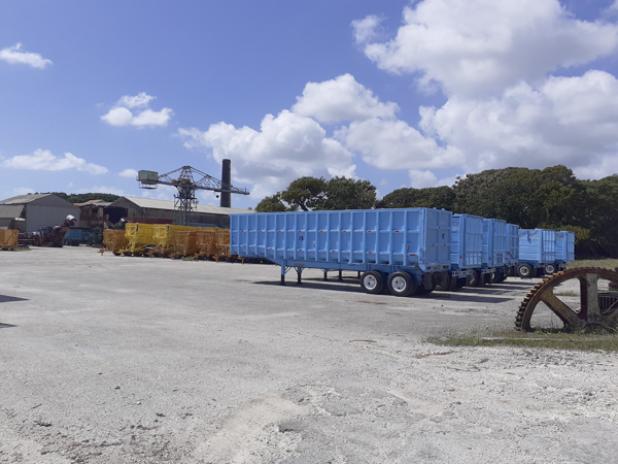 Pictured here are some of the trailers at the Carrington’s transfer station in St. Philip.

PERSISTENT rainfall during the latter months of last year could redound to Barbados having an improved 2021 sugar cane crop.

The optimism is coming from Edward Clarke, a senior executive at the BFL, which is owned by Sagicor Financial Company.

“I would say that we are expecting a better sugar harvest due to the fourth quarter’s rainfall,” Clarke told Business Monday in a recent interview. He said there was a planned meeting with other members of the BFL team, following which they would have a better and more updated position as far as projections are concerned.

Towards the second half of last year, Barbados witnessed tremendous rainfall, reversing earlier projections of dry conditions for most of the year.

No date has as yet been set for the start to harvesting the 2021 sugar cane crop, which is tentatively expected to see more of the sweetener being produced.

Clarke said that they are hoping that the Portvale Sugar Factory will be ready to start the crop early this year, and “we can get a maintenance free year and receive our harvest payments on a timely basis”.

Among the preparations taking place are the sprucing up of some of the trailers which transport the canes from the transfer stations to Portvale.

They are also hoping the impact of the pandemic will not negatively affect “our work during harvest”. The industry produced about 10,000 tons of sugar last year, slightly higher than the output of 2019.