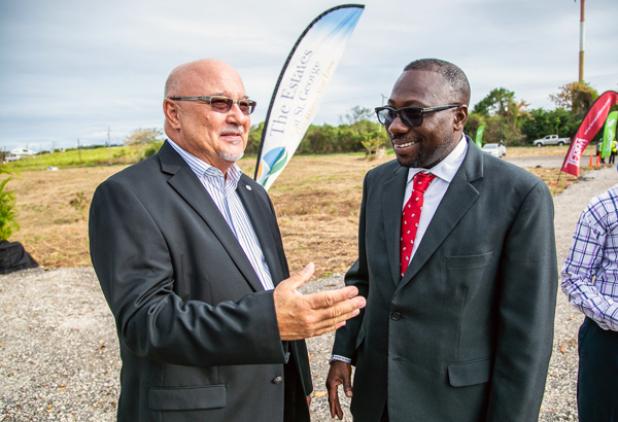 GIVEN the breathtaking scenery of the picturesque St. George’s Valley and some areas to its north west and north east, Boarded Hall is a kind of late comer for major real estate developments, unlike several other elevations across Barbados.

All of that is about to change, however, as Sagicor, a leading financial services provider, has taken a bold and impressive step to put down what will be Barbados and the English-speaking Caribbean’s first retirement village, The Estates at St George Adult Active Lifestyle Community.

The project, occupying a sprawling 19 acres of land in that St. George area and costing Bds$170 million, will usher in a complete transformation of the area and has multiple aims.

Those aims range from lifestyle services for individuals, improving the Barbados economy, to transforming the area and making it a drawing card for additional investments not directly related to the project.

In a recent interview with Business Monday, Edward Clarke, Executive Vice President and General Manager, Sagicor Life Incorporated, highlighted some of the project’s main objectives. He remarked straightaway that The Estates will be a community where people will be able to reside while enjoying an active lifestyle and having the comfort of several amenities, including a pool. They will also have the ability to meet with other residents, go on walking trails, attend lectures at a clubhouse, to name a few.

According to Ravi Rambarran, Sagicor’s Chief Operations Officer, there will also be a high-end gym and spa, and a 4.5-acre green space. “The Lakeside Terraces” will comprise an orchard, organic vegetable gardens, walking trails and other recreational attractions.

The facilities will be open to persons of all ages, and Clarke said: “They will as well present opportunities for Barbadians and others who buy into the project” to live in a community spirit, and to benefit from health care.

When the need arises as people age they don’t have to look elsewhere for residences, as the project will afford them what Clarke called catered living. Ultimately, if that person/persons reach the stage where they are unable to cope on their own and require skilled nursing care, that is when that component – primary nursing care – comes in.

The project is to be done in three phases. According to Rambarran, phases one and two will comprise 176 stylish independent living residences for sale with access to a clubhouse, pool, tennis courts, orchards, pub and formal dining. Phase three will comprise 84 skilled nursing and memory care suites for rent, with suites grouped in small neighbourhoods to create intimacy and personal attention to care and services. There will be 40 catered living one and two bedroom apartments for rent as well.

Doctors’ offices are another feature of the residences with the urgent medical care and specialist doctors’ offices, spa and gym operating 24/7.

Clarke said that the units for catered living will be centralised and they will be rented to individuals on a long-term basis. “This is an opportunity to offer continued care in the future and this is the concept we are selling and that is why we believe it will succeed. Obviously the location is fantastic,” he added.

The area in question overlooks part of the picturesque St. George’s Valley. According to Clarke, it is breezy and peaceful, and while you are in the country area, you are still not far from Bridgetown, the Grantley Adams International Airport, and the shopping mall at Haggatt Hall. Beyond this The Estates present an opportunity for people to invest in a lifestyle and as you age where you live.

Sagicor has received the expected support from Government and its agencies to make this project happen, since Clarke believes that this kind of initiative is badly needed in Barbados. He believes it can be a springboard for other investments directly and indirectly related to it. What also makes the company very upbeat is that response so far from those buying into it has been very positive.

A Canadian entity in the field of caregiving will be managing The Estates. That company is an expert in this area, having done similar management operations in Europe. “And we are impressed with them,” Clarke noted, adding that Sagicor is also a significant entity backing this project.

Clarke said that to date the response to the project has been tremendous as a number of people have started to buy into it and are already making early reservations. The responses have come from Trinidad and Tobago, some OECS countries, and Barbados.

An upbeat Clarke noted, “I believe and I am convinced this project is going to do well, and we will get the returns we have anticipated from the investment,” he said without divulging numbers.

He added that although there were downturns in real estate activities in Barbados, the market is rebounding given that confidence is coming back to Barbados.
Right now his job is to promote the project, and he is currently in the United States doing so, as well as pursuing the other component, which is a Medical Research Facility – another plank to the project.

In promoting the venture, they intend to go after the Barbadian Diaspora as well. (JB)