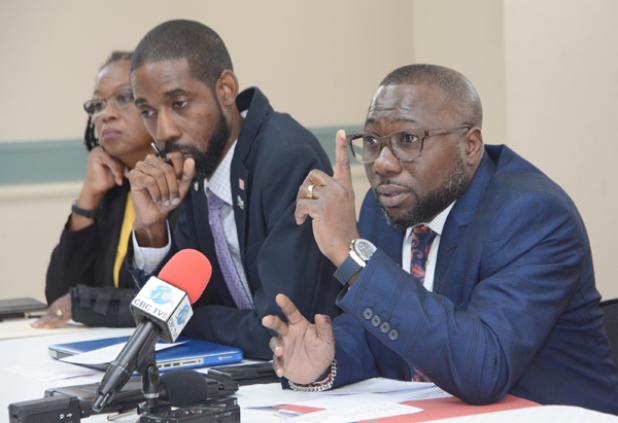 Minister of Small Business, Entrepreneurship and Commerce, Dwight Sutherland, making a point during the press briefing. Looking on are (far left) General Manager of FundAccess, Esther Lord-Graham and Chairman of FundAccess, David Simpson.

FundAccess has been making an invaluable contribution to this country in terms of building up an entrepreneurial class and providing gainful employment for persons.

According to General Manager of FundAccess, Esther Lord-Graham, for the past 21 years the state-run entity has been assisting from sno-cone vendors employing one person, to manufacturers employing as many as 20 persons. She made the comments during a recently held press briefing at the Warrens Office Complex to officially start the disbursement of the funds to the members of the United Transporters’ Co-operative (UTC) to be part of the Transportation Augmentation Programme.

“We have so far pumped $65 million into the Barbadian economy, creating an average of two jobs per week for every week we have been in existence. Additionally, the services of our business development department has ensured that contrary to the saying that small businesses close after the first year to 18 months, the majority of clients funded by FundAccess have remained in business, some of them even celebrating their anniversary alongside FundAccess,” she said.

She added, “Now I am not an economist or a statistician, so I can’t tell you the dollar value of the jobs FundAccess has created, but I can remind you that job creation has a positive impact on poverty reduction and stability in any economy, especially economies like ours.”

Lord-Graham made the point while noting that FundAccess’ clients have contributed to the GDP by creating additional employment opportunities and generating wealth and income, and in so doing have minimised pressure on the social welfare system of the country. As such, she said it is fitting that FundAccess should welcome the UTC’s members, former employees of the Transport Board, into its family.

With that in mind, she went further, urging the Minister responsible for FundAccess, Minister of Small Business, Entrepreneurship and Commerce Dwight Sutherland, to ensure that adequate financing is made available to help the entity continue to execute its mandate.

Adding to her comments, Minister Sutherland, commending the work of FundAccess, said that the $65 million that it has disbursed was done by way of over 2 000 loans and created 2 439 jobs.

He made the point while also taking up the challenge from the General Manager, to pump more money into the lending institution to help even more entrepreneurs. (JRT)