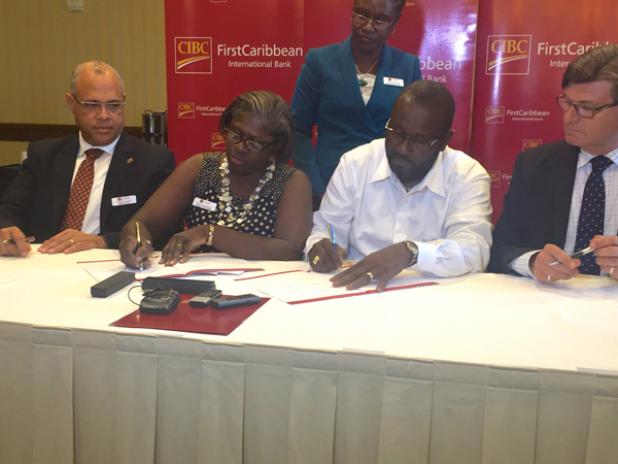 Speaking at the ceremony, which took place at the Hilton Hotel, Theresa Mortimer, Chairperson of the First Partnership representing the Bahamas Financial services Union, expressed that it was truly a pleasure to be re-signing the agreement.

“What this means is that CIBC FC is still very much on board with working with the Caribbean trade unions. We see this partnership as one that helps to put CIBC FC International Bank’s focus on industrial relations issues; and these issues enhance and improve the relationship between the bank, the employees and of course, their respective unions,” she said.

Neil Brennan, Managing Director of Human Resources at CIBC FC explained that the first partnership had been in place for 12 years and expressed that it was a difficult process to go through to establish in the first place.

“It was a complicated issue but there was a lot of hard work by a good many people to put the partnership in place; and it has been a very successful partnership agreement for both our union partners and CIBC FC,” he said.

Meanwhile, Mark St. Hill, Managing Director for Retail and Business Banking said that the Partnership Agreement was unique in the sense that it formed a bedrock for the guiding principles of the relationship between the bank and the unions across the region.

He explained that the renewal of this agreement would continue to help guide the bank for the mutual benefit of their most important resource, their employees. He noted that through this agreement, they hoped to continue to deliver growth for the bank and the unions. “So I’m very excited to be renewing this partnership and I have to say that for all of the years that we’ve been here, I can truly give testimony to this [evolving] relationship and partnership ...,” he said.