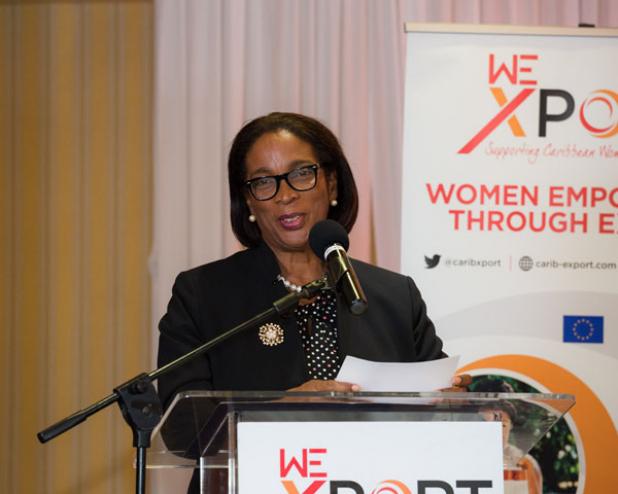 Minister in the Ministry of Foreign Trade, Sandra Husbands.

WITH Barbados’ goods exports languishing in the region of Bds$510 million over the last two years, there is a concerted effort by the current administration to push exports to help grow the economy.

Minister in the Ministry of Foreign Trade, Sandra Husbands, said so during her address to the closing ceremony of the WE-Xport programme, mounted by the Caribbean Export Development Agency.

Saying that exports form part of government’s growth strategy, Ms. Husbands told the function at the Hilton on Friday night, that Barbados will be looking to expand exports to Guyana, Suriname and Panama. In fact, she said that Prime Minister Mia Amor Mottley, along with partners, is working to make it possible.

Telling female entrepreneurs that Barbados’ GDP requires them, Ms. Husbands stated that every penny they make contributes to the island’s economy.

The Minister stated that because this country is currently undertaking the Barbados Economic Recovery and Transformation (BERT) programme, one of the ways the government can transform the economy is through the growth of exports, particularly among small businesses.

“So what you have done here contributes to our being able to advance our objectives under the BERT programme,” she declared.

Directing her comments to the women who are part of the programme, the Minister said that women have made a difference any time they are empowered, any time their creativity has been released and any time there is a more favourable environment for them to operate.

“We must not lose any opportunity in which to push for better, more supportive conditions for us to function and to bring the best of who we are to the country we love,” the Minister remarked.

She said that across the world and in the CARIFORUM region women are advancing in the business world.

Ms. Husbands maintained that traditionally in our matriarchal society, women have tended to lead from at home, and given an apparent shift in that thinking, they are stepping into the business world to provide not only for their family, but to grasp opportunities to use their skills to the fullest.