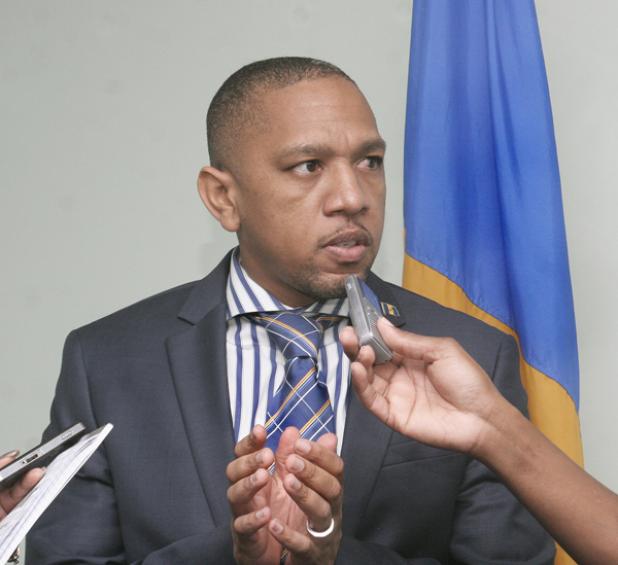 Chief Executive Officer of the FSC, Randy Graham, speaking to the media.

Sat, 04/09/2016 - 12:00am
After five years of the Occupational Pension Benefits Act (OPBA) being in force, as many as 76 occupational pension plans are still not fully registered with the Financial Services Commission (FSC).
That is according to Chairman of the FSC, Sir Frank Alleyne, who contended that while the FSC will continue to work to have the outstanding plans registered, those who refuse to register could face the legal action. He made this clear yesterday during a press conference as he explained that the slow pace at which the plans are meeting the requirements as set out in the OPBA, has forced the Commission to request an extension on the deadline for registration from the Minister of Finance.
“…This is the first time they are being held accountable. What happened with them in the past, they were registered with the Inland Revenue Department, but there was no regulation. So you could be in a situation, before the coming into being of this Commission, where you retired, you contributed to that pension plan and there was no money there for you. Or if there was money, there was an inadequate pension which you would get because the plan was not properly funded. This Commission will ensure that the plan administrators are held accountable,” he maintained.
Adding to Sir Frank’s comments, Chief Executive Officer of the FSC, Randy Graham, explained that the pension plan administrators now have until 2017 to become fully compliant with the law. He noted that unless there are extenuating circumstances, those not fully registered could on summary conviction face financial penalties and/or even imprisonment.
Graham, noting that the OPBA is an “extremely progressive piece of legislation”, said his office does recognise the challenges that entities could have in meeting the requirements of the law, but he is adamant that they have no intention of dropping their standards in order to have full compliance.
“What we have been doing as a regulatory body is meeting with the service providers, the actuaries, the data managers, as well as meeting directly with the administrators… Every registered entity with the FSC is assigned to an officer and the officers are making contact on a periodic basis with these entities to work through the challenges that they are having,” he said.
Graham added, “Up to last week we met with the actuaries independently to see how they are progressing with the data. So we are comfortable that we are moving through this process, and we expect by 2017 to have most if not all of the plans registered.”
In an interview after the press conference, when questioned as to whether those plans that are registered are providing annual data to the FSC, Graham said they are, but it is “not as consistent” as his office would like, but getting better.
“The first year which was 2012, it was a little, not many represented. We got better in 2013, we got in 2014; so we are probably up to 60 or 70 per cent of the pension plans now actually getting annual statements,” he stated.
Graham later told The Barbados Advocate that there are 303 occupational pension plans in total, adding that those yet to complete the full registration process are not without oversight neither are they operating rogue, as they have provisional registration. (JRT)