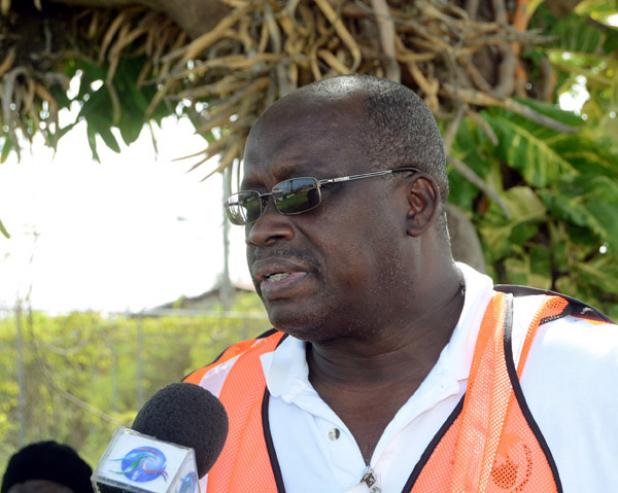 Chief Executive Officer of the BAS, James Paul, speaking to The Barbados Advocate.

Mon, 10/03/2016 - 12:00am
Commercial banks and other financial lending institutions in this country are being urged to step up to the plate and offer financing to the agricultural sector.
Chief Executive Officer of the Barbados Agricultural Society (BAS), James Paul, is adamant that such support is needed if the agricultural sector is not only expected to grow, but to make a greater contribution to the local economy. His comments came in an interview with The Barbados Advocate on Friday afternoon at the airport, where he was witnessing the offloading of some 194 cows brought into the island to help bolster the dairy industry by way of a loan of over $1 million from RBC Royal Bank.
Paul is suggesting that if farmers can have access to more financing and at favourable interest rates, it would go a long way towards helping them meet the country’s food needs and demands and help to bring the country’s massive food import bill down.
“I really want to appeal to some of those other banks in the financial community that did not step forward and help. We should not have any doubts that the agricultural sector is a financing option, that basically it is bankable. I don’t see why banks should hesitate in terms of moving in that direction, because we have continually shown that we have dedicated farmers who are prepared to go the distance to see the sector excel,” he maintained.
On that note, the BAS boss believes that if the sector is to be given a fair chance by banks, then those financial institutions must reassess the way in which they evaluate agricultural loans. Admittedly, he said the nature of the agricultural sector and its susceptibility to various threats can make financing institutions wary, but he said they cannot utilise the same criteria used to evaluate other commercial loans to determine if they will lend to farmers.
The agriculturalist also noted in the interview that the Board of the BAS secured the financing on behalf of the farmers to buy and import the cows, and they believe that this decision should show financing institutions that the farmers are serious about advancing agriculture in this country.
Moreover, he said they have no doubt that the system will be successful and will provide a template that the Board can utilise to proceed with other transactions to benefit to the agricultural sector.
“I don’t want to import anymore cows, but in terms of joint action on the part of farmers to get inputs, we want this to be the first of many to come, and even in terms of the way in which it was financed, I would like to think it is a way of solving some of the financial problems that the agricultural sector is currently experiencing.
“We have a difficulty attracting the traditional banks in terms of helping to finance the sector, but once we are successful in this transaction, it would help to give them greater confidence to trust us in same way they trust other sectors,” he added. (JRT)