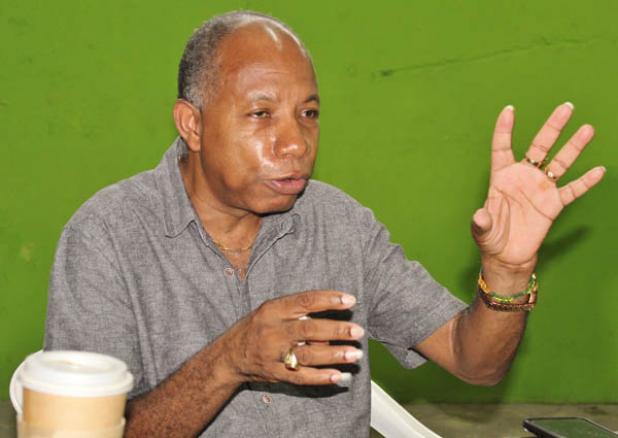 David Denny, General Secretary of the Caribbean Movement for Peace and Integration (CMPI) and spokesman for the Black Lives Matter Beach Protest.

THE Caribbean Movement for Peace and Integration and the 13th June 1980 Movement have made preparations to go ahead with their jointly organised  Black Lives Matter Beach Protest, scheduled to take place today at 2:00 p.m. at Maxwell Beach, Dover, Christ Church, adjacent to the Sandals Barbados hotel.

According to David Denny, General Secretary of the Caribbean Movement for Peace and Integration (CMPI), what they are not prepared to do however, is to pay the Royal Barbados Police Force (RBPF) the total of $531.89 that it has requested as part of its services, to provide police officers and a vehicle for the picket.

Pointing out that the “Reclaim the Beach” picket is being held to speak out against what the two groups say is the hotel’s effort to block off part of the beach to locals, Denny however maintained that this new request by the police for payment for their services, is not part of the Public Order Act and goes against their fundamental human rights to protest.

Speaking to the media during a press conference held yesterday at the Israel Lovell Foundation, Denny showed a copy of the letter requesting permission for the protest action and also a letter slated to have come from the RBPF, showing a total as well as the breakdown of costs for the services of police personnel, inclusive of one station sergeant and three constables, as well as the provision of a motor van.

“I don’t know if the Royal Barbados Police Force is trying to create the conditions for poor men and women in Barbados to be forced into a position where they will no longer be able to voice their concerns, in terms of participating in peaceful pickets because it is impossible for poor people who want to voice their concerns to pay for that kind of service, when it is not even within our Constitution,” he added.

Denny said they plan to however carry on with the protest action and take the matter higher, if they are denied from protesting.

“We are prepared to take the matter to the court, once it is possible. We are also prepared to continue our protest action tomorrow, next to the Sandals Beach Hotel and three, we are going to write a formal letter to the Attorney General of Barbados, expressing our true feelings about this matter and also lay a complaint against those leading officers who are responsible for this negative behaviour, that is denying Barbadian people the right to protest,” he said.

Denny also noted that if necessary, they will be writing to Prime Minister Mia Amor Mottley if nothing comes of the matter and if no adequate response is given, they will be taking the matter, which they see as a human rights issue, to the level of CARICOM. (RSM)